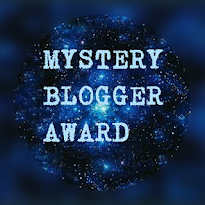 The Rules
-Display the award logo on your blog
-Mention Okoto Enigma, the creator.
-Thank the blogger who nominated you and provide a link to their blog (Thanks McKayla! I had a lot of fun)
-Answer 5 questions from the blogger who nominated you
-Tell your readers 3 things about yourself
-Share the link to your best posts
-Nominate 10-20 bloggers and notify them that they are nominated
-Ask your nominees 5 questions of your choice----including one weird or funny question
-Continue the chain
Yeah, I'm drawing a blank on facts, so we'll save that for later.

Three things about myself:

I have a tendency when I find something I like (particularly with clothes) to with stick with that thing until it physically falls apart. It's actually kind of a problem.

Not sure if this counts but...

I have a personal headcanon that 'Betty,' the girl who's perspective Taylor Swift sings from in 'Cardigan,' is the girl in 'Seven' who's name Taylor Swift can't remember. My reasoning for this headcanon is that there's the line 'leaving like a father, running like water' from 'Cardigan' and then in 'Seven' there's mentions of 'I think your house is haunted, your dad is always mad, and that must be why' and 'and we can be pirates, then you won't have to cry or hide in the closet'

I think the fact that Taylor Swift can't recall the person's face and the possible underlying 'father/dad' storyline adds to the 'passed down like folk-songs' idea that she was going for. Most likely I just read into that way too much, but I've thought that since I heard the songs and I've wanted to talk about it. Anyone else agree/disagree? I'd love to know.

I have dirty blonde hair and blue eyes

If you were spontaneously given the lead role in your favorite musical with a day to learn all your lines, what would be your gut reaction?

Among several other reactions and responses.

Now if I didn't have anxiety, a crushing fear of failure, and actually had the required skills to star in a musical, this might be a different story. There's a few I'd love to do if I had the ability.

If you could have dinner with one cast member from one of your favorite shows, who would it be?
I think we're talking about the real actors, but I think the character they play would be fun too. I wouldn't call it my favourite show but Jaskier/Joey Batey from the Witcher. Are we noticing a theme at all?

If we're talking about musical cast members then possibly, as far as most recent favourite musicals go, either Eva Noblezada or Reeve Carney from HadesTown. Although there's so many others I'd love to meet too.

What is your opinion on bunnies?
I think they're adorable.
Years ago, fairly close to where I lived at the time, the area had a feral rabbit problem so it was pretty common to just see rabbits all over the place. I was too young to care about the politics of it but I still laugh over the fact that a city had very divided opinions about what to do about it. Petitions were made, it was discussed in community meetings, there was controversy, deals were made, rabbits were rampant in the streets. Again my knowledge of what was happening was just like "There's bunnies!!" I don't know what the extent of what happened even was but I love that I remember that it was a major thing at one time. City Hall had had enough of their feral rabbits and they were cracking down. And eventually, at some point, you realized that the rabbits were just gone.
Who's your favorite unlikable/problematic/villainous/just not very nice character and why?
Billy Hargrove was the first person that popped into my head so for simplicities sake I'm going to stick with him. He got a character arc in season 3 but in season 2 he was a complete jerk to put it nicely. That being said, I did kind of like him in season 2. I thought he added something to the show. He had a very intense presence and he was just really good at it. He had a style. It was interesting to watch. Maybe it was the added stakes and on-edge energy that he brought into each scene that captured my attention, I don't know. Have I mentioned that Dacre Montgomery is an amazing actor?

I was going to let myself do more but once I put more then one I couldn't stop myself.
Which do you prefer: ketchup or mustard?
Depends on the thing or the day.
As far as hotdogs go ketchup and mustard are my two go-to condiments anyway.
I'm going to say ketchup because of fries, but mustard is a fairly common one for me.
If you haven't already been tagged for it and you feel like doing it then
Violette
(from Violette's Universe)
Livia (Rachelle)
(from Rose Petals and Fairy Dust)
Megan Chappie
(From The Pen and The Cross)
Samantha
(From Bookshire)
And anyone else that wants to do it.
My Questions:
What is the first pairing you remember shipping?
What is the weirdest, most unusual, or one-of-a-kind thing you own?
If you had a surprise birthday being thrown for you, what are 3 fictional characters you would want to be there and why? or (What fictional character would you pull a prank on someone with?)
If you could steal a costume or an outfit from a show/movie, which one would you take?
What was the last line in a book, line in a movie, or lyric in a song that hit you hard?